Well, with all this staying at home, it’s a good time to head back through the archives in order to post on the trips I had been on after my Copenhagen trip, oh so long ago.

Let’s start off with Madrid.  Madrid es muy interesante  (Madrid is very interesting.).  Yep, since my trip to Spain last year during Easter, I’ve been learning Spanish.  I’m not quite at the point where I can have full on conversations, but at least I can get the gist of things when people are speaking.  Just gotta keep going.  Thank goodness Netflix has a ton of Spanish language movies and TV shows available.

Why Madrid?  Why not Barcelona?  It was a bit of a toss up at first, but after I had talked to friends who have been to both cities, plus some online blogs, the overwhelming opinion was that if it’s your first trip to Spain, Madrid is the better option as it tends to be less ‘touristy’.  They weren’t wrong and honestly, Easter is a good time to go.  The crowds are still there, I mean Madrid is a major European city after all.  However, they’re far more manageable.  Honestly, I would avoid going in the summer.  I can imagine that the place would be absolutely chock-a-block.

I stayed in the museum area, down the road from The Prado, Madrid’s answer to the Louvre and the British Museum and the Museo Nacional Thyssen-Bornemisza.  Pew!  A mouthful, that.  My hotel was right behind the Museo Nacional Centro de Reina Sofia.  It’s THE contemporary art museum in Madrid.  You want to see works by Dali, Goya, Miro and Picasso?  This is where you need to go.  This is, in fact, where Picasso’s massive “Guernica” can be seen.  I’ve mentioned in other posts that one of the things that keeps me going back to Europe (one of the things, mind) is the plethora of fabulous places to see art.  Not just the massive museums but also the smaller galleries and private museums.  There are treasures to be seen in the most unlikely of places.  And because of the long history of families in Europe, many one time residences have been turned into museums that are well worth a look.  Case in point is the Museo Lazaro Galdiano.  This is a 19th century mansion with a very enviable art collection which includes pieces by Goya and Bosch.

What else did I like about Madrid?  Where to start?  I am a big fan of their approach to work/life balance.  Sitting in a plaza with a glass of wine or beer, watching life go by is a hell of a way to spend some time.  A little vino tinto y tapas (red wine and tapas) makes life a joy.  Like much of Europe, the architecture is amazing.  From the old to the new, there’s something interesting to be found in the buildings.  Green space is everywhere!  The grand boulevards are basically parks unto themselves, and that’s not including the actual parks themselves.  Retiro park is massive and that’s just one example within the city.  Then, of course, there are the people of Madrid.

I met a lot of great people in my travels around the city, which certainly helps in forming an opinion about the place.  There was the lovely gay couple who own and operate the restaurant “Matilda”.  With its welcoming atmosphere and fantastic coffee, this quickly became my breakfast stop during my trip.  I met custom hat maker Isabel Terroso Torres, owner of BALEL Luxury Hats. (Why BALEL?  “When I was young, I couldn’t say ‘Isabel’ so I would just say ‘Balel’.”).  I met a nice young couple who, after getting me to take their picture in front of a very popular building in Plaza del Sol, gave me a history lesson as to why it’s so popular (it’s where the annual new year’s fireworks go off).

One of the more interesting experiences occurred one evening while I was sitting out in the plaza behind my hotel, enjoying the weather and a cigar.    I was sitting on the stairs when a group of teenage girls came and occupied the corner behind me, chattering away as teen girls do, in their machine-gun Spanish (man, they speak quickly).  A short time later, a mixed group of boys and girls came up.  One of the girls from this new group and the most vocal of the original group came together, at which point the new girl proceeded to haul off and slap the other right across the face!  Not once, but twice.  The one who got slapped was remarkably calm about it all and just seemed to be trying to explain something.  Now, even though I couldn’t understand what was going on, it doesn’t take a genius to figure out there was probably a boy (or girl) in the middle of all this.  So, the two of them headed off to the far side of the plaza, still bickering and gesticulating wildly as Latins typically do, but at least the slapping seemed to be done with.  In the meantime, the rest of the new group hung around and started chatting with me.  “My friend, she’s crazy!”, said one of the girls to me.  As we got to talking, she got quite excited about my being from Vancouver.  “I love the waless”, she said.  I sat there trying to figure out what she was talking about as she kept repeating the word.  It wasn’t until she finally said “orcas” that I realised she was talking about whales!  Ah, pronunciation.  Had I known then the amount of Spanish I have now, I would have figured it out.

So, go to Madrid.  Well, once it’s actually safe to travel again.  I definitely plan on being back.

Wandering around the streets of Malasaña, came upon a large number of recycled clothing items that had been turned into planters.

The Thyssen-Bornemisza museum had a large exhibition of works by Polish-French artist, Balthus. “Thèrése dreaming” garnered a lot of attention.

The outer courtyard of the Reina Sofia as seen from one of the outdoor balconies.

Madrid lights up at night

As part of the Easter festivities, Plaza Mayor became a massive stage for the finalé of the drum festival

Artwork in the inner courtyard of the Reina Sofia museum 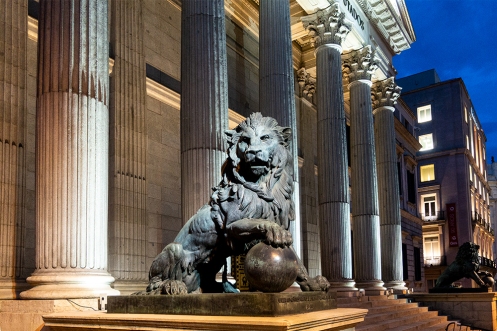 The Prado museum had a large exhibition of sculptures by Alberto Giacometti throughout the museum, from the small, like this set on a table-top, to some that stood around 2 m tall 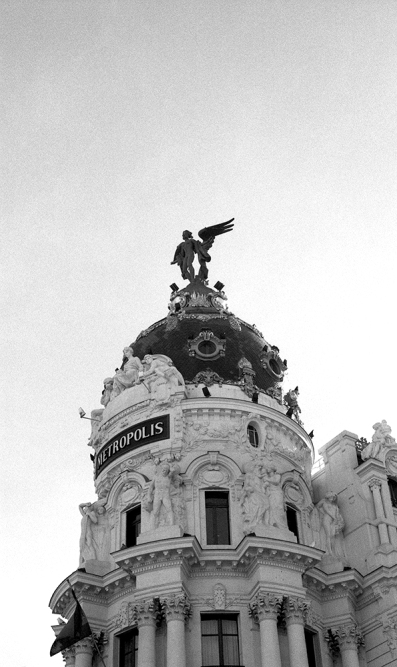 Artworks of artwork at the Prado 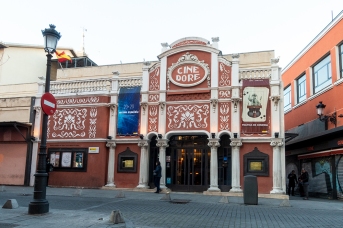 What a fantastic old movie theatre in the Malasaña area 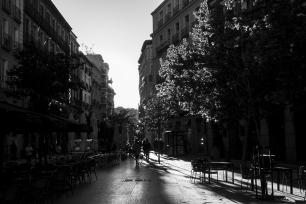 Sun sets on the streets of Madrid

Fountain in the inner garden of the Reina Sofia 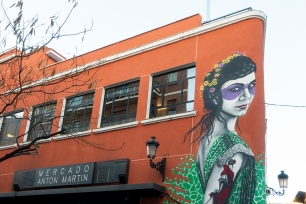 Sculpture at the Thyssen-Bornemisza 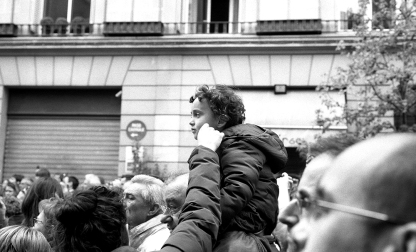 Watching one of the Easter parades

The 12 metre high sculpture “Julia” by Catalan artist, Jaume Plensa. The way it was created gives it a different perspective depending on where you view it from. 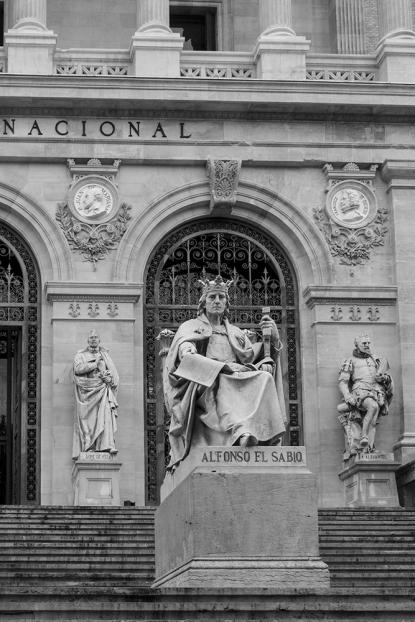 In front of the National Library

Taking a rest from all the Easter festivities in Plaza Mayor.

Fat Spiderman! Apparently he’s been a tourist staple in Plaza Mayor for years.